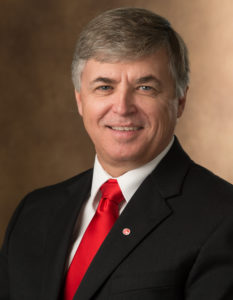 Dr. Randy Pembrook became the ninth chancellor in Southern Illinois University Edwardsville’s history on August 1, 2016. The Metro East native returned to the campus where he earned both bachelor’s and master’s degrees. Before his return to SIUE, Pembrook served as the vice president for academic affairs at Washburn University in Topeka, Kansas from 2011-16. Prior to Washburn, Dr. Pembrook served at Baker University for four years in a number of roles, including executive vice president and provost, and was Dean at the Conservatory of Music and Dance at the University of Missouri-Kansas City. Since his return to SIUE, Pembrook has encouraged students, faculty and staff to shape a changing world. His commitment to strong community connections has been reflected in new programs at SIUE, as well as individual actions. Dr. Pembrook currently serves as an officer on the Leadership Council Southern Illinois Executive Committee and is the Leadership Council Education Committee chair. He serves on the Civic Progress and St. Louis Regional Chamber boards. Pembrook also serves as the Boy Scout Association Director of Cahokia Mounds District. At SIUE, Pembrook has helped shape the Faculty Innovation Center, SIUE Innovation Grants and the Successful Communities Collaborative. SIUE is the fastest growing Illinois public university over the last 20 years and is the largest provider of bachelor’s degrees in the St. Louis metro area.
Accessibility by WAH