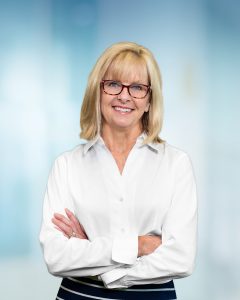 Patricia L. Fischer, RN, MBA, FACHE serves as President and Chief Executive Officer of HSHS St. Elizabeth’s Hospital in O’Fallon, Illinois. Patti joined HSHS in August 2014 as President and CEO of HSHS St. Francis Hospital in Litchfield. She then accepted an invitation to serve as Chief Operating Officer at St. John’s Hospital in November 2016 and again answered the call to serve at St. Elizabeth’s Hospital in May 2018. Prior to her arrival at HSHS, she served in various roles in hospital operations and physician practice management including physician recruitment. She has more than 20 years of health care leadership experience and previously served as vice president of physician services for Saint Anthony’s Health Center in Alton. Patti began her career as a staff nurse in a critical care unit at St. Luke’s in St. Louis where she received her nursing diploma. She also has a Bachelor’s Degree in Finance from Florida Atlantic University in Boca Raton and an MBA from Washington University in St. Louis. She is a fellow in the American College of Healthcare Executives. She has also served on the Illinois Hospital Association’s Small and Rural Hospital Committee, and on the Illinois Critical Access Hospital Network Issues Committee.