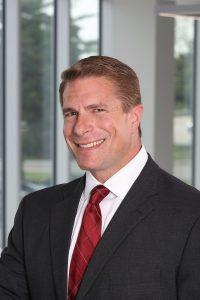 Robert Pickerell III joined St Louis Bank as Senior Vice President Commercial Banking and Market Expansion in September of 2018. Rob is one of the premier lenders and banking executives in the greater St. Louis area, specializing in the Metro East region. Rob has more than 17 years of experience serving his clients, with significant expertise in commercial banking, SBA lending programs for start-ups, mergers and acquisitions, and business succession planning. He has previously served at institutions including First Clover Leaf Bank, Regions Bank and Centrue Bank, moving to the acquiring bank in several mergers throughout his career. Most recently he served as VP/Team Lead in Commercial Lending for Midwest Regional Bank.

Rob resides in Maryville, Illinois. Rob and his wife (Jennifer) have a son (Trevor) and daughter (Kaitlyn). Outside of spending time with his family, Rob volunteers his time as the Finance Chair on the School Board at Good Shepherd Lutheran School, along with serving as a youth soccer coach. Rob’s professional affiliations include Leadership Council Southwestern illinois, where he serves as the Economic Development Committee Chair; United Way, where he serves as the Communications Chair, Th Division Auxiliary Board; IL Small Business Development Center for the Metro East, where he serves as an Advisory Board Member; Edwardsville/Glen Carbon Chamber of Commerce, where he serves as Ambassador Chair; and Edwardsville CEO Board Member. Rob was awarded the “2017 Volunteer of the Year” by the Edwardsville/Glen Carbon Chamber of Commerce. He was a 2019 and 2018 Small Business Monthly honoree, featured on the “Best Bankers” list and also a 2016 honoree, featured as one of the “Top Southern illinois People to Know to Succeed in Business.” Other interests include reading, fitness, and traveling.