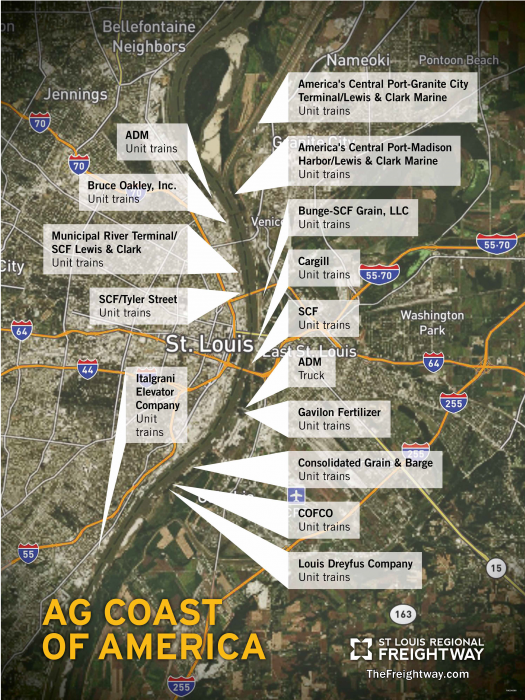 Over $2B Invested in Utilities

Southwestern Illinois is known for having the lowest cost- and cost-effective utilities in the nation. With over $2B dollars invested in utilities and infrastructure the region is now looking at partnering with the utility companies to map critical infrastructure assets for key development sites. For more information about this project please contact the Leadership Council at 618-692-9745.

Over $220M Invested in the American Bottoms Levee

The Metro East Levee System, which is 65 miles in length, consists of five levee projects located in Madison, St. Clair and Monroe Counties in Illinois. The four levee districts are Wood River, Metro-East Sanitary District, Prairie Du Pont and Fish Lake Levee Districts. The levees were authorized and constructed to a height equal to 54 feet on the St. Louis gage, with completion of the original construction several decades ago. In 2008, FEMA threatened de-accreditation of the Levee Systems. That is when the counties formed and funded the SWIFPD in 2009. Over $220M federal and local funds were invested to reduce flood risk in the metro east.

Since that time more than $170M in Federal and local funds have been invested in aged levee infrastructure to reduce risk. The work that remains is correction of underseepage issues with the levee system. This is a critical issue that increases risk of failure.

Initial efforts to remedy the underseepage issues, called the 100-year level improvements, are complete with $74M of new construction invested to date with full FEMA accreditation that took place in 2019, and the remaining underseepage correction projects are now underway.

The 500-year, authorized level, improvements are underway. The $95.2M Federal appropriation that took place in December 2018, when combined with the local efforts, will complete all remaining underseepage corrections in the East St Louis Levee.

The Metro East Levees protect 288,000 people/employees, 4,000 businesses, over 56,000 jobs, 111,700 acres, and $13.3B in assets. The funds will not only protect but provide opportunities for local people to work as local contractors. Efforts continue to take place to hold Levee Risk Management Meetings that are being shared throughout the region.

“The St. Louis District is committed to working with our partners and stakeholders in rehabilitating the Metro East Levee System and improving the quality of life of those we serve,” Col. Bryan Sizemore, commander, U.S. Army Corps of Engineers, St. Louis District said.

As the restoration of the levees that protect more than 288,000 people, 4,000 businesses, and over 56,000 jobs, 111,700 acres, and $13.3B in assets from Alton, IL to south of Columbia, IL located in Madison, Monroe, and St. Clair counties continues; businesses and homeowners can feel confident our region will be protected against flooding now and long into the future. The $110M invested to restore the levee system is being hailed as one of the largest and most successful projects in Southwestern Illinois and in our nation. In 2016, this project received regional recognition from East -West Gateway Council of Governments for innovation and design excellence award.

In 2007, Federal Emergency Management Agency’s (FEMA) announced its intention to de-accredit the 65 miles’ levee system in place to protect the St. Louis Metro East Region. Leaders of Madison, Monroe, and St. Clair counties quickly responded by working with the Illinois legislature to create the Southwestern Illinois Flood Protection District (FDP). Our County Chairman (Madison, Monroe, and St. Clair Country) along with support from our state delegation were key players in deciding to locally fund the project. Without the leaders of our region uniting for the greater good of its people, the American Bottoms in Madison, Monroe, and St. Clair counties would be placed in a Special Flood Hazard Area with devastating economic consequences to our region.

The Leadership Council simultaneously created the St. Louis Metro East Levee Issues Alliance (LIA), in support of the FDP. The LIA is a growing coalition of business and civic organizations, community leaders, and concerned citizens supporting the timely completion of the improvements needed to restore our levee system to prevent devastating economic outcomes. It’s truly admirable that the Flood Prevention District Council and Levee Issues Alliance Committee are working towards finishing the $110M project to restore the levee system in 2017. If left up to the federal government, our levee system would have taken decades to be completely restored. In 2007 the U.S. Corps of Engineers estimated that the earliest completion of the project would have been 2044.

The Flood Prevention District Council (FPD) and Levee Issues Alliance Committee (LIA) has saved the St. Louis Metro East region a great deal of time and money, while putting the safety of the community as their top priority. Not only did this levee project save our community $50M annually from increased flood insurance premiums, but allowed businesses to prosper, and employed local workers during the levee’s restoration. Our region owes its gratitude to local contractors and workforce for the timely completion of our levee system, which is nearly thirty years ahead of the U.S. Corps of Engineers original estimate of 2044. The FDP has been working methodically to have the Metro East Levees improved to the latest federal standards and expect FEMA accreditation to the 100-year level of flood protection, which was completed in 2019. The removal of inaccurate flood maps will aid in economic development in the future.

The successful completion of the levee system signifies the efforts of our region’s hardworking local governments, workers, and citizens. Our counties are the only region in the nation to proactively address this challenge with this type of vision and leadership as a public private partnership. Our local governments could have easily passed this restoration project to the national government, but instead took it upon themselves to locally raise money, hire contractors, and set an ambitious timeline for the project’s completion. The FPD and LIA demonstrated the type of leadership and composure needed to execute such a significant project quickly and rationally, while having the best interest of its people at heart.

The restoration project has improved the stability, reliability, and performance of the 68.5 miles of the levee system. Companies in the region such as Amazon, Phillips 66, and FedEx can be ensured they will be protected due to the added safety of our restored levee system. Incoming businesses can look at the locally funded and constructed levee restoration as a perfect example as why they should move their business to Southwestern Illinois. Thanks to this project, the St. Louis Metro East region will continue its economic growth and development.

The restoration has been an overwhelming regional success in ensuring the safety of our communities while continuing the economic growth within our region. The American Bottoms Levee Project can serve as a model of how successful region projects can be completed in a cost effective and timely manner when everyone is working together for a common goal. The collaboration between everyone who worked to make this project successful has been incredible. This effort in ensuring the safety and economic development of the St. Louis Metro East region is honorable and serves as an inspirational model for other regional projects. WELL DONE!

Southwestern Illinois offers over a hundred miles of interstate highway including I-44, I-55, I-64, and I-70. Highways I-55, I-64, and I-70 are major interstates that are linked via I-255/270, which forms the St. Louis metropolitan circumferential loop. They are an integral part of the east-west and north-south national interstate road network, which converges in the St. Louis metropolitan area. Due to the local highway system, it allows for a 2-day access to 70% of the U.S. population and 62% of the U.S. businesses by truck.

America’s Central Port, located adjacent to Locks and Dam #27 on the Chain of Rocks Canal just three miles from downtown St. Louis, provides a mid-continent intermodal transportation facility location for the shipment of dry, liquid and containerized shipments. Over $1.1B+ of freight is transported annually. America Central Port has 2 Multi-Modal Harbors and is one of the U.S.’s busiest freight ports and America’s second and eighth largest inland ports. In addition, it is the northern most ice-free port and lock free on the Mississippi River.

Southwestern Illinois, as part of the bi-state St. Louis region, is one of the largest rail centers in the United States. The region has over 30 miles of rail and access to six Class 1 Railroads and 24-hour switching services. In addition, there are approximately 10,000 rail cars per day and more than 30 railyard facilities and warehouses available. The region is served by nine trunk-line railroads, with more than 40 rail lines radiating to all parts of North America.

Madison County Transit operates a fixed-route bus service within and between different communities in Madison County, connections to MetroLink and express weekday commuter service directly to and from downtown St. Louis. For elderly and disabled residents who are unable to use the fixed-route buses, MCT provides complementary paratransit bus service. MCT is also responsible for the construction and maintenance of approximately 100 miles of trails in Madison County that comprise the MCT trails bikeway system, as well as overseeing RideFinders, the St. Louis region’s Free carpooling and vanpooling program.

The Leadership Council has continued throughout the years to “unite the region for growth”. Each year the SITE Committee sets priorities to focus on. In 2013, the Southwestern Illinois Freight Transportation Study was completed by the Leadership Council, which identified ways to grow the multi-modal infrastructure capabilities and jobs in transportation/distribution and manufacturing verticals in Southwestern Illinois. This study created the recommendation for the foundation of the St. Louis Regional Freight District and was approved by the region’s metropolitan planning organization East-West Gateway Council of Government. The Leadership Council provided multiple years seed money to start the St. Louis Regional Freight District and continues to be a regional partner today. The Council is very proud of the work the St. Louis Freightway continues produce, such as enhancing business investment, creating new jobs, and building further transportation infrastructure opportunities.