For over a Century, the communities of Southwestern Illinois and the St. Louis metropolitan region have embraced and treasured “Our” Scott AFB. Our support and working relationships have flourished since 1917, forged in the spirit of mutual trust and respect. Since 1990, we have weathered four rounds of Base Realignment and Closure (BRAC), and each time emerged with increased mission and strategic importance to our nation’s defense. Scott AFB is the only Air Force Base named after an Enlisted Person—Corporal Frank Scott, the first enlisted man to perish in an aviation accident. This year was another outstanding year for Scott AFB and our region. We are extremely proud of our legacy of unwavering support of Scott AFB. 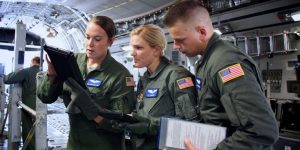 The Leadership Council, its 250+ members, representing the greater St. Louis Metropolitan area and its 2.9 million citizens continues to grow because of our relationship with Scott AFB. We proudly support and collaborate with Scott AFB’s Wings (375th, 126th, 932nd, and 635th) and its 36 mission partners for the good of the region and the nation. The Leadership Council’s Military Affairs committee has representation on the Air Mobility Command Civic Leader and Base Honorary Commander Programs, Lt. Governor Military Economic Development Commission, Strategic Action Groups, and the Secretary of the Airforce at the Pentagon (civic leader representing Southwestern Illinois). In addition, conferences and other groups are have active participants such as the ADC Conference. However, the support doesn’t end there. Ongoing commitment continues with working with the Airman & Family Readiness center to support transitioning airmen and families though reverse job fairs with top employers and community partners, industry specific job fairs such as in the trades, local facility tours that have sustainable regional employment, and overseeing the Scott Patriot (scottpatriot.com) website listing military friendly employers. Regional wins the Military Affairs committee has played a key role in include the: 2019 teacher reciprocity; 2020 expedited licensure (110 licenses) for Active Duty, Military Guard, Reserve, and U.S. Coast Guard; partnering with the military spouse groups; enhancing Military Interstate Children’s Compact; and Scott AFB surrounding k-12 schools rated #1 in the country for excellence in educational institutions by the Department of Defense!

Pure and simple, Scott AFB is integral to the economic growth and development of the St. Louis metro region. Scott AFB, with its 56,865 personnel and 79,534 dependents and many retirees is the largest employer in Southwestern Illinois producing more than $3 billion in regional economic impact. Scott AFB is the 5th largest employer in the St. Louis metropolitan area. In addition, Scott AFB continues to have regional economic impacts. Over $300M in new construction will take place ($100M Joint Operations Mission Planning Center, $41M Communications Facility, $3M Demolition of Old Lodging, $6.5M Conversion of the Hyser House from Lodging to Office/Mission Planning Space, $14M HVAC and Fire Suppression Improvements; and $140M Other Renovations). Recently, I-64 at Rieder Road, a $50.5M project was also completed for a new interchange. The construction is all great news for Southwestern Illinois as the regional contractors grew 40% in the last decade. 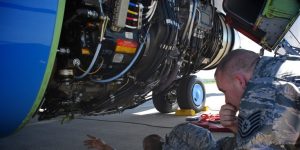 Our communities and leaders, on both sides of the Mississippi River go above and beyond every day to find new and better ways to support our base. Frankly, supporting Scott AFB is in our DNA and has been for generations. Growth in our region doesn’t happen without strong collaboration and communication with Scott AFB and its many commands, leaders, service members and their families. The Leadership Council is also proud to support and work with other military agencies like the U.S. Army Corps of Engineers, the U.S. Coast Guard Upper Mississippi River District and the National Geospatial-Intelligence Agency. In total, the regional military presence, to include active, guard, reserve, DoD civilians, families and dependents and retirees, totals well over 90,000 patriots. Working together as one team, the

This program is aimed at ensuring that those local businesses and communities that are providing support to our friends at Scott Air Force Base and their families are recognized as military friendly, while also growing the level of support the base receives from other area businesses.

To The Scott Patriot